Some of these sounds are not in the 100EZ book. Use the pronunciation guide below. ea silent a
e silent e
igh silent gh
ow as in cow (or long o as in tow)
ou as in out
tion as in shun
cy as in cycle
ci as in city
gn silent g
kn silent k
le as in little
ture as in chure
ph as in phone

(only at YoungMinds Printables and Resources) 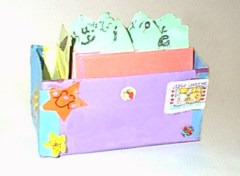 This is a picture of the cards that I made way back around 1996. My daughter was finished with Teach Your Child to Read in 100 Easy Lessons and my son who had gone to public school during k-2 had apparently forgotten everything he had learned about pronouncing words. My son noticed that his little sister, 2.5 years his junior, could read better than he could, and being the logical boy that he is, he asked to be taught these sounds. So during the year of '96 the kids and I sat on the floor of the living room and used the cards to build words. The photo doesn't show it, but in the side pocket are yellow mark-up cards. We used those to break words into syllables and mark the accented syllable.

I had just about every imaginable sound combination, below are two - the ie sound and the 3-letter long i.

Applies to V Planner V4+.
How to use Master/Override in the lesson planners.

The 3-page attendance calendar for one student that matches the colonial planner.

What?! A Handwriting Planner.. whaaaaat? Sort out your handwriting lessons! There are 4 pages with a ruled background and 6 groups of blocked areas, each made up of 30 cells, which = 180 lesson plans. A matching ruled paper file is provided.