You are here: Home / Life / Garden / Flora / That Little Daisy

A few years ago, when “that little daisy” began blooming, I thought to myself, “I should find out what that flower really is.” Thus began the search for the name of this flower and I found it easily enough, but the next year, I forgot the name. The search began again, and then I forgot the name the following year. I don’t remember how many times I forgot this flower’s name. Well guess what? I remembered its name this year and I think I remembered it last year too, but I am not certain about that. It’s a kind of fleabane. 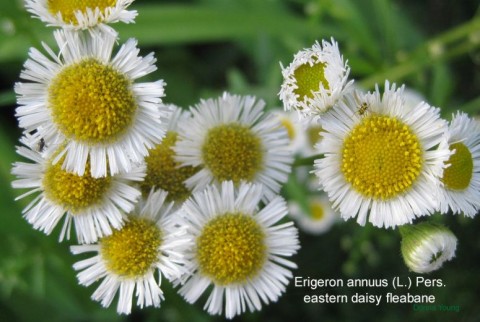 Today, out in my chilly garden, I took a photo of the fleabane, and then later decided to look up fleabane to see what is officially said about this flower. That is when I am reminded that there are several fleabanes and at that point, I wanted to know what MY fleabane is called. The search began in earnest when the first fleabane web page that I looked at said that its leaf base wraps around the stem, so that only meant that I had to go back outside to my chilly, and now sprinkling-rain garden to see if MY fleabane has leaves that wrap the stem at the base of the leaf – it didn’t. While there I noticed that MY fleabane has serrated leaves. Back inside I found a web page about a serrated leaf fleabane, Erigeron annuus (L.) Pers., eastern daisy fleabane, and decided that was the one and I am pretty sure that it is since it is blooming now and will continue to bloom for months. [One other reference for this flower and the The University of North Carolina Herbarium as a reference for many flowers]

I am starting work on the V Planner V3 … END_OF_DOCUMENT_TOKEN_TO_BE_REPLACED

A few days ago, I took a walk in the … END_OF_DOCUMENT_TOKEN_TO_BE_REPLACED