We tried all of the brands throughout the years. Our progression through the brands went from the inexpensive to the expensive. Holly's first colored pencils were inexpensive and picture below in the homemade pencil holder. In the holder, I grouped the pencils by color and as you can see, they are still grouped by color. Holly continued the sorting method. 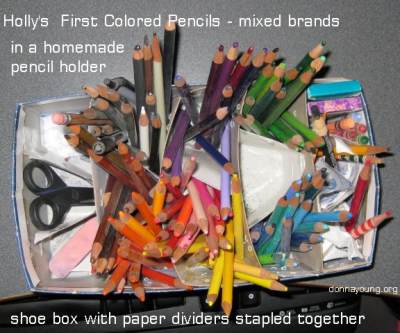 The mix of brands pictured above consists of

. The pencils were purchased during the 1990's.

were the most favored color pencils at our house. 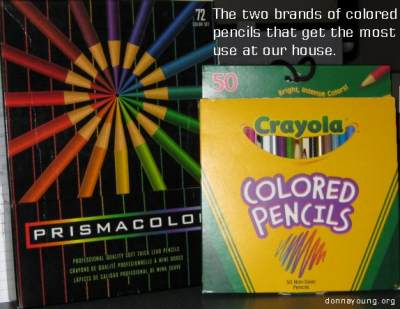 as a gift years ago, late 90's more or less. She liked the pencils and used some of the colors up and we purchased replacements.

The coverage that one can get from Prismacolor® pencils is excellent. To illustrate the coverage, Holly has allowed me to show a couple of her old drawings. The drawings shown below are some of her first efforts at using Prismacolor® pencils. The examples below show how densely the colors can be applied as shown in the thick pink and red (in places) of the subjects' hair. The colors can blend. Even in Holly's inexperience, she was able to make delicate skin tones in the first drawing.

Sample drawings with prismacolor pencils by a 10 year old. 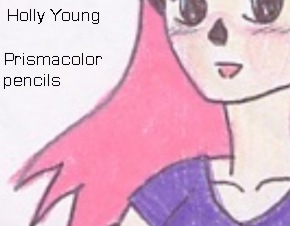 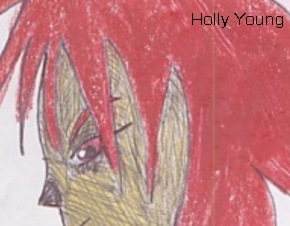 fall into the inexpensive category. My daughter has been using them a lot lately. The coverage is not as dense or creamy as Prismacolor®, but apparently they are good enough for what she is currently working on. You may see examples at Crayola® Samples.

Homeschooling: How I Taught My Children About the Calendar

The site-cd, YoungMinds, is available for sale after having been unavailable because of our home repairs. ALTERNATELY, you can Subscribe to YoungMinds, Donna's best website. YoungMinds is like donnayoung.org, it has most of the same URL's, BUT YoungMinds contains exclusive content and there are no 3rd party ads messing up your view of this awesome website. 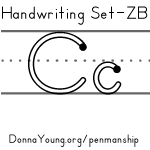