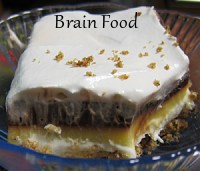 This recipe became popular in the 1980's and used to always be present at family gatherings. We called it brain food because you are smart if you get a piece before it is gone, but it was probably called something boring like layered pudding; I just don't know. I am trying to bring it back by taking it to family gatherings again and like before, this dessert gets eaten, so get it while you can - if you're smart.

On the day that you will make this, remember to set out a stick of butter, the cream cheese, and the cool whip. If the cool whip thaws before you make it, put the cool whip in the refrigerator.

Preheat your oven to 350 degrees Fahrenheit

Crust - Combine flour, butter and pecans and mix it thoroughly. This is probably the hardest part. Spread the dough to cover the bottom of a 13 x 9 inch baking pan. The word spread is euphemistically used. It's more like mash the dough onto the bottom of the pan. It helps to drop the dough into the pan in clumps, spacing the clumps out so that you can actually manage to cover the bottom of the pan. I've done it, so can you. Bake the crust at 350 degrees Fahrenheit for 15 - 20 minutes, until it gets a little golden.

Cool the crust to room temperature before continuing.

First layer - Mix the powdered sugar, half of the cool whip, and the cream cheese until it is well blended. Drop this in hunks over the cooled crust and spread it out.

Second layer - Mix the vanilla pudding according to package directions. Don't wait the 5 minutes; after you mix it for 2 or 3 minutes, slowly pour it over the cream cheese layer.

Third layer- Mix the chocolate pudding according to package directions. Don't wait the 5 minutes; after you mix it for 2 or 3 minutes, slowly pour it over the vanilla pudding layer.

Fourth layer - Spread the rest of the cool whip on top of the chocolate pudding layer. If you are eating this the following day instead of "today", then the fourth layer can be added shortly before eating. I say this only because, sometimes, the chocolate pudding layer sends up a little color to the whipped topping layer if it sits for longer than a day. It's not a big deal.

To make this dessert gluten free, substitute the flour with a gluten free alternative such as rice flour or sweet white sorghum flour or what you normally use as a substitute. The resulting crust, when I made it gluten-free, is that the crust was more crumbly and it had to be dug out of the pan rather than the crust lifting up with the pudding.

Pipe Cleaner Candy Canes - use to decorate trees, or gifts

I finally remembered to update the half-sized calendars. They were all about to expire and I can't let that happen! Now they are updated to the year -- ... go there and see! 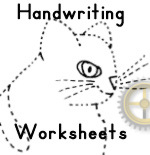