Various sizes of Printable 100-number charts that may be added to your personal homeschool curriculum, or for classroom use, or for use at home.

Don't miss the section "Using 100-Number Charts" that is at the bottom of the page!
Lessons that use the 100-Number Charts are described
Introduction to Multiplication- "Counting By"
Is it divisible by 3, 6? 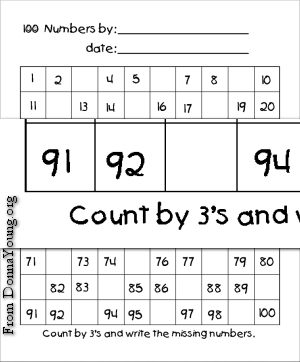 Set One is a small set of 6 printable charts. Each chart prints over most of the printer paper, which just means that it has big squares and big numbers.

The lessons that set one features are #1. counting by 3's, #2. counting by 4's, #3. even numbers, and #4. odd numbers. Check how well the child is doing in this topic with the rest of the printable files.

The Font in Set One

Set One is made using the font that is named "kids", which is a rather childish looking font. I don't remember why I chose to use it; I made these files a very long time ago. If the font is an issue then please skip to the next set of charts - Set One B.

This set is similar to the set above in both size and missing number sets.

Set One B is a set of 9 printable 100-number charts. Each chart prints over most of the printer paper, which just means that it has big squares and big numbers.

"Hundred Board" Before we Leave the Large 100-Number Charts

I'm sure that some of you would like to have a typeable area on the printable file for lesson plans or games. I have two typeable 100-number charts. The first one, the PDF is only typeable in the bottom part of the file (see image on left). This typeable area could be used for "directions." The second file is a "doc" and the entire file can be typed on, but please leave my name and URL on the file.

Hundred Number Chart - Entire file can be typed on, and please leave my name and URL on the file.

Set 2a includes 18 printable files, half of which are for YoungMinds subscribers. Each file will have two 100-number charts and the file name describes the 100-number chart. The first group of files are the "Count by" charts on which the missing numbers are divisible by a certain number. The next group of files consist of basic charts—filled and blank and charts will have a certain amount of missing random numbers per row. The file name will be something like "Missing 3 Random Numbers per Row". This is not the same as "count by 3", this is 3 random missing numbers.

The order in which the worksheets are presented does not matter because all of the missing number 100-number charts in Sets 2B and 2C are random. For that reason, the individual files are identified with numbers.

I'm grouping these files because of their similarity. The groups of files will be labeled either Left for Set 2B or Right for Set 2C.

The file names describe the printout.

The Before and After chart instructs the student to "Write the Numbers in the Gray Areas". 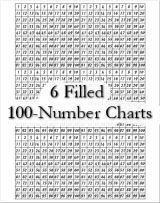 Introduction to Multiplication- "Counting By"

For each lesson:
-Choose which type of chart to use from the choices above - either filled in or blank or one that has missing numbers. If using a fill-in type chart, obviously the child will have to complete the chart first.
-Choose which number to "count by" : 2's; 3's; 4's; 5's; etcetera.
-Last, slot the lessons in your planner and do the lessons.

The chart pictured here has been highlighted by 2's.

Math Shortcuts, is it Divisible by 3, 6

The student could start learning a few math tricks by observing the patterns in the chart and the numbers.

Divisible: division in which there is no remainder

I finally remembered to update the half-sized calendars. They were all about to expire and I can't let that happen! Now they are updated to the year -- ... go there and see!