During the 1990's I developed this recipe to my taste and it has since become a family favorite. 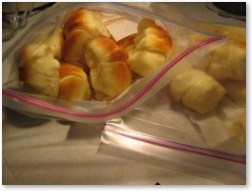 Make this bread dough in your mixer with its dough hook.

Stir or whisk these ingredients together in the mixer bowl:

Let the yeast proof for 5 minutes. After 5 minutes, the mixture should have a foamy/bubbly look on the surface. 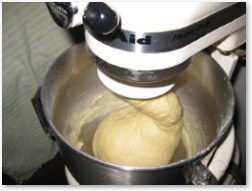 Put your mixer bowl in its stand, attach the dough hook and mix the dough until it is smooth, adding a little more flour if it is needed. Do not add much more flour - this dough will be a little sticky. Mix at least 10 minutes on the proper setting for dough, refer to your mixer's manual if you do not know what the setting is supposed to be. 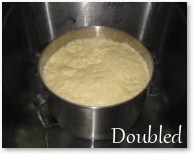 Remove the dough hook and cover the bowl. Put the bowl in a warm place. Typically, I put a few inches of hot water in the sink and set the bowl in that - with the bowl covered and with a large cookie sheet and towel over the sink.

After the dough has doubled (about 45 minutes) turn it out on a floured surface. Divide the dough into 3 pieces of the same size. With a rolling pin, roll 1 of the 3rd's into a circle. Spread 2 teaspoons of the butter over the dough circle and with a pizza cutter, cut the dough into 12 pie shaped pieces. 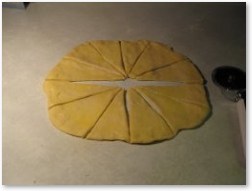 To shape the rolls: Roll each piece starting at the wide end and rolling toward the narrow end. Place each piece, not touching, in a buttered cake pan or a jelly roll pan. 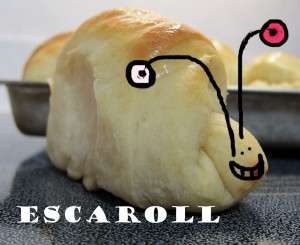 I've been making these rolls since the 1990's for family dinners. Our family is on the small side, so I usually make 1 1/2 recipes. Occasionally I double the recipe so that my mother can keep a dozen for herself.

One day I wrote out my family's two favorite recipes of mine by hand and made copies for everyone. My sister held the papers in her hand by its corner as if it were covered with spiders and said, "What's this? Does this mean you aren't going to make rolls anymore?"

PDF-Donna's Rolls
This is the file. It's the same as the recipe above, but the instructions are a little different.

Homeschooling - What is Weighing Grades?

Weather - The weather page is updated to include two printable files for the half sized binder.