As of this very minute you can create custom cursive handwriting worksheets for your children! C.Small features 2 layouts, 4 variations and the rule is approximately 1/4 inch tall. Only at YoungMinds Online

Have you been hankering for printable handwriting paper that features an ultra bright yellow lower rule space? If yes, then this is your lucky day, my friend! If no, move along to a previously listed awesome addition to donnayoung.org.

I have finally added M.Small to the collection of handwriting lesson generator templates. This set has a letter size of around 9mm. The set features 2 blank tops, full, and 2-lesson templates.

Near the bottom of the gift tag page, I have added three more printable sheets of ready to print Christmas gift tags. Each one has a theme and they are - Tags #4 Birth of Christ, Tags #5 Santa, and Tags #6 Holly. Each sheet has 10 different tags.

This is as much seeing the value range of your drawing pens and pencils as it is an exercise toward achieving just the right shading in your drawings. This page is updated with new images and two new files that are challenging.

I decided yesterday to make some handwriting strips while looking at a penmanship sample that I had cut out to evaluate some other handwriting thing. Read about these and see which handwriting styles are available at the page linked. See you later, alligator.

I wrote this recipe for Creamy Chicken Noodle Soup on August 1st, 2011 and I've made it many times and has since become a family favorite. Ingredients- onions, carrots, chicken, chicken broth, half & half, cornstarch, and sour cream. Chicken may be substituted with turkey

I needed a new one of these files, so I made one. With the printout, you can record the login info for your favorite URL's or just the important ones. 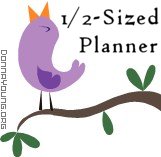 The 2014 Half-Size Dated Block Planner is online and ready to print. Like all of my half-size files, the finished pages are designed for binders that use 5.5" x 8.5" paper. I hope that you like it. 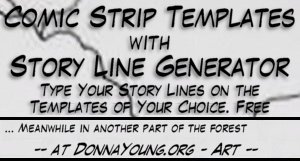 Guide Words Printable Lessons offers to print cards and other printable items that can be used for the guide words lessons. The guide word lessons include instructions for both beginning and advanced.

October 2013 - Homeschool Planner > Lesson Plan Forms > Row
The Row Lesson Planners - I've updated this page to include links to my row planner files rather than links to pages that contain row planners. If you are unfamiliar with a row planner - it is a different sort of layout, plans are listed in rows rather than boxes and is ideal for the classic broad assignment, such as "This Week - Read chapter 1 and do so & so ... , work is due on [date]".

I reformatted the Ten Subject Grade Form and added a white and yellow version of the form. At the single subject grade form, I linked the alpha keyed form, noted the Roman keyed form, and added links to Roman Keyed planners.

Weather - a section in our Nature Journal - The weather page is updated with more information and two printable files for the half sized binder.

Choose from several bordered papers, fill in the form with a drawing assignment, "Please, draw this ---", press the "Generate Worksheet" button and save the resulting "art lesson" image for printing.

Gray Line is named such because the lower part of the rule is gray. In the file links below the gray rule is described as Dark, Medium, or Light. Gray Line is available in seven rule heights and includes two rule styles - Regular and Tall. Gray Line also comes in Blank-Top.

The Fuchsia Booklet is designed to be folded in half after printing. The margins and formatting are designed for this. The line colors are blue and fuchsia.

TOC Planner for Exploring Creation with Chemistry and Physics

The TOC planner is not lesson plans, it is a series of pages that are designed to help you plan Exploring Creation with Chemistry and Physics from Apologia's Young Explorer Series.

This is a new form style at donnayoung.org. The design is "clean" (uncluttered) and the layout utilizes the margins by extending the row lines.

Big Cal uses 4 sheets of paper per month. When assembled, Big Cal can be pinned to a corkboard. The finished size is approximately 21 inches wide by 16 inches tall.

I made another version of the Blue Calendar today. The blue is lighter, the lines are finer, the row with the days is light gray, and I used the font Garamond.

A video of a "dead" potato beetle waking up and then "dying" again. The videos have been broken for a while, and now they are working.

Video of a Monarch Butterfly Emerging - The videos have been broken for a while, and now they are working.

Butterfly Video - Assisting a Monarch butterfly after emerging. The videos have been broken for a while, and now they are working.

Household- Half-sized - Paper - This page has filler paper for half-sized binders. I have updated this page, test printed all of the files, and added a few new files.

This new planner is Portfolio X - Subject and it is a more complete planner with more homeschool planner file types. Just like Portfolio - the planners are made for 5 days a week and 7 class types. [rtf]

A New Single Student Lesson Plan for The Human Body: Fearfully and Wonderfully Made

By request, I have added Italian and Latin to the cover sheets. The cover sheets are available in file formats - PDF, DOC, and RTF.

Requested - Basic Check Register for the 1/2-sized planner, sometimes called personal sized, and the requester called it junior sized. There are two files - One prints a pair of vertical registers and a second file prints a horizontal register.

An article describing how to use the worksheet GS-QP in V Planner V3. GS-QP refers to Grade Scale and Quality Points and it is the sheet where the grade scales are made.

Unlock A Cell
Sometimes I forget to unlock the cells into which I have placed dropdown lists. My most recent embarrassment is in V3 where I didn't unlock any of the Master/Override list cells. 4/28/2013

V Planner Video: Tip: How To Expand the Height of the Rows

Make Rows Taller
How to make the rows taller so that all of the contents are displayed. Example shows lesson planner "Block1."
4/28/2013

What does Beta Mean regarding the V Planners?
Beta means "don't use this planner, play with it; learn how it works"
4/28/2013

V Planner Video: Which V Planner am I Using?

How to Know!
This short video goes over how to tell which V Planner that you are using.
4/28/2013

Requested - The diploma pictured here, but without the border. It is a typeable PDF.

How Lesson Plan Columns are Handled in the Planners

This video explains how the 3 columns of lesson plans are handled in the planners. Please watch this video before adding lesson plans to the S-Sheets. [March - 2013]

How to use the Char Planner - a planner in which, if your computer uses a character map, line breaks may be added after each lesson plan. [March - 2013]

See what was new during 2012 at donnayoung.org.

Donna's Homeschool Planner Index - So much awesomeness at your fingertips! WOW!